The Law of Privilege – issues for in-house legal

Privilege has long been recognised as a fundamental principle of English law. For several hundred years, the law of privilege has protected the right of clients to communicate with their lawyers in confidence, without fear that those communications will later be disclosed to third parties during the course of litigation. However, the modern commercial context has generated numerous challenges to the law of privilege, most notably for areas in which it is common practice for non-lawyers to advise on legal matters.

These challenges are compounded further by the ubiquitous use of electronic communication and data storage; emails in particular are highly vulnerable to widespread dissemination which may undermine a document’s confidentiality. Even in circumstances where privilege has arisen, it is all too often lost at the click of a button, leaving litigants facing the prospect of disclosing sensitive documents to their adversaries and into the public domain.

This briefing outlines the current status of privilege from an English law perspective, before addressing some common issues and scenarios particular to in-house counsel in which they may run the risk of making communications that lack the protection of privilege.

The current status of privilege

The Supreme Court delivered its judgment in early 2013 on the most recent case to consider the limited scope of the law of privilege. The judgment serves as a cautionary tale for those across all industries who receive legal advice from non-lawyers. The case concerned tax advice given to Prudential plc by its external accountants, disclosure of which had been sought by the Revenue. The court ruled that because the advice was given by non-lawyers Prudential plc was not entitled to claim privilege. This meant that all relevant communications were fully disclosable, even though the advice was indisputably legal in nature and had it been given by a lawyer there would be no doubt as to privilege attaching.

The Prudential case concerned legal advice privilege, a category of privilege that attaches to confidential communications between clients and their lawyers during the “ordinary course of [the client’s] business”. The Supreme Court’s ruling reinforces the strict rule that only communications between lawyers and members of the “client team” will benefit from the protection of privilege. This contrasts with another category of privilege, litigation privilege, which applies in circumstances in which legal proceedings (such as court litigation or arbitration) have either already commenced or are highly likely to do so. In this situation, communications with third parties will also be safe from disclosure, provided their dominant purpose is linked to the conduct of the proceedings.

The Supreme Court’s decision further entrenched the “client team” concept which emerged from the litigation in the early 2000s between creditors of the collapsed BCCI and the Bank of England. The Court of Appeal’s highly restrictive interpretation of who exactly constitutes the “client” for the purposes of obtaining legal advice engenders a significant risk to clients even in circumstances where the advice has been given by an external lawyer. Under the rule created by this case, only employees of the advisee client whose role it is to request and receive advice from external lawyers will be able to assert legal advice privilege over those communications.

The meaning of “lawyer” and of

Once a client has obtained confidential advice from a lawyer over which it may safely assert privilege, there follows the enduring challenge of retaining it. This issue underlines the distinction between litigation privilege and legal advice privilege, namely that the former will attach to communications with non-lawyer third parties while the latter will not. Thus, if litigation is reasonably in contemplation, imminent or existing, and the purpose of the communications is predominantly connected to the proceedings, litigation privilege will protect both confidential advice obtained from non-lawyers and a lawyer’s advice which the client has then forwarded to a third party.

Conversely in the case of legal advice privilege, the protection from disclosure may be lost if the client shares with a non-lawyer third party the confidential legal advice received from a lawyer. In these circumstances, the client is taken to have waived its right to assert privilege where the extent of the document’s circulation is such that it no longer fulfils the definition of a confidential communication between a client and its lawyer. That third party may even include employees of the same company who are not part of the “client team”. Clients must therefore exercise caution when disclosing parts of documents or documents that form part of a sequence (such as one email in a chain), as it will be open to the other parties in the litigation to force disclosure of the remaining document or documents over which the client will be held to have waived its right to privilege. This last principle applies to both litigation privilege and legal advice privilege.

At the time of signing the agreement, there was no contemplation that litigation would arise. Thus, there would be no scope in this scenario to assert an entitlement to litigation privilege. This example is precisely the sort of scenario that the Prudential decision would exclude from the scope of legal advice privilege. Even if the accountants addressed their advice to the in-house legal department, the rule in Prudential would apply and their advice would not attract the protection of privilege.

If, however, in-house legal (being legally qualified and retaining a practising certificate) had raised the same objection and offered the same advice, then provided that the advice itself was confidential, legal in nature and confined to the negotiating team (insofar as they are the relevant “client team” in this scenario), then the advice would attract privilege. The same would be true if external lawyers advised on the same issues, and legal advice privilege would protect the advice from disclosure in the later dispute.

Emails present the law of privilege with a unique challenge. Preserving the confidentiality of emails is considerably more difficult than, for example, letters. This is due to the ease with which emails are circulated, forwarded or copied to third parties, frequently unknowingly or by accident. It is crucial for the entitlement to and maintenance of legal advice privilege that the confidential advice is restricted to members of the company’s “client team”. Circulation to third parties of these emails or others in the chain may result in the loss or waiver of privilege and the requirement to disclose the full chain of emails.

In the absence of litigation privilege, the question hinges on the identity of the member of the in-house legal team. If he or she retains a valid practising certificate and is subject to regulation by the Solicitors’ Regulation Authority or Bar Council, provided the advice is confidential (which it clearly is) and legal in nature (again, this seems certain here), then legal advice privilege will attach to the email communications.

Where an external lawyer advises on the merits of a claim, certainly litigation privilege will apply. The forwarded advice would remain privileged, subject to any subsequent loss or waiver.

Let us imagine, however, that the advice was more generic (in respect of the company’s redundancy procedure, for example) and that litigation privilege did not apply. The possibility of legal advice privilege attaching will depend on the identity of the in-house legal team member.

In the Dadourian case, the court held that only advice from lawyers with valid practising certificates regulated by the Solicitors’ Regulation Authority or Bar Council (or equivalent foreign regulator) would attract privilege. The circumstances in this case involved a solicitor whom the regulator had struck off for malpractice. Although arguably a scenario in which a solicitor has simply allowed his or her practising certificate to lapse is distinguishable from the Dadourian example, it remains advisable for in-house legal to ensure that their practising certificates are valid in order to protect the privileged status of their advice.

On a strict application of the Dadourian rule and in the absence of any authority to the contrary, the same appears to apply to professional support lawyers, trainee solicitors and paralegals (whether in-house or otherwise).

If the in-house lawyer is caught by Dadourian (either for lack of a practising certificate or because he or she is a trainee), the act of forwarding the advice on to other members of the company without the firm in copy would run a very serious risk of extinguishing any entitlement to privilege. Even if the firm was copied in, widespread circulation by itself may serve to undermine the confidentiality of the document such that privilege is lost forever.

Law firm’s advice will serve to destroy any claim to legal advice privilege which may have previously attached.

Following the Azko Nobel case, in-house lawyers are considered by the EU courts to be “insufficiently independent” of their employer companies for the attachment of privilege to their advice. Therefore, it is likely that any communications from in-house legal (including the potentially damning anti-trust advice) would be disclosable to the Commission investigators.

In-house legal should also note that generic advice that is not legal in nature (in this example, that which relates to commercial strategy) may not attract privilege under English law either.

The answer will depend on whether or not litigation has already commenced or is reasonably in contemplation. It is irrelevant that the company may never commence litigation on account of the surveyor’s findings, only that there is a “real likelihood” or that litigation is “reasonably in prospect”, whether it be as claimant or defendant to an action. A mere possibility of litigation or a general apprehension of future proceedings will not suffice.

Notwithstanding the above, and assuming that this scenario does not satisfy the “reasonably in contemplation” test necessary to establish litigation privilege, the rule affirmed in the Supreme Court’s Prudential decision would apply and legal advice privilege would not attach to the surveyor’s report.

Whether litigation privilege would apply or not would depend on the circumstances, but the most prudent approach would be to consider that it does not. This is because the preparation and preservation of risk assessment reports is a general procedural step performed in order to ensure prudent operating practices, thus it cannot be said that specific reports serve the interests of litigation as their dominant purpose.

If the reports’ draftsmen are not lawyers, it is unlikely that legal advice privilege will attach either. The lack of confidentiality to a “client team” connected to any claims which may arise from risks reported on the database vitiates further any entitlement to claim privilege in this example.

Because the initial advice is legal in nature, confidential to the commercial director and provided that the advice came from a qualified lawyer with a valid practising certificate, it will benefit from the protection of legal advice privilege. However, dissemination to the rest of the company (or even to a selection of individuals outside the “client team” relevant to the original joint venture proposal) will almost certainly suffice to extinguish any claim to privilege which would otherwise have arisen.

This example highlights the importance of ensuring that confidential advice remains confidential. In order to mitigate the risk of removing an entitlement to privilege, the commercial director could have instructed in-house legal to draft a separate and generic advice for circulation to the wider company.

This briefing has covered some of the obstacles and pitfalls that may undermine an entitlement to privilege. In-house legal and the companies they work for must exercise abundant caution in order to safeguard their confidential communications against disclosure to third parties during the course of litigation, both by as far as possible ensuring that the advice they receive is privileged in the first place, and preserving that protection permanently.

The flowchart below illustrates the way in which the courts will determine whether or not a document may be protected by privilege. 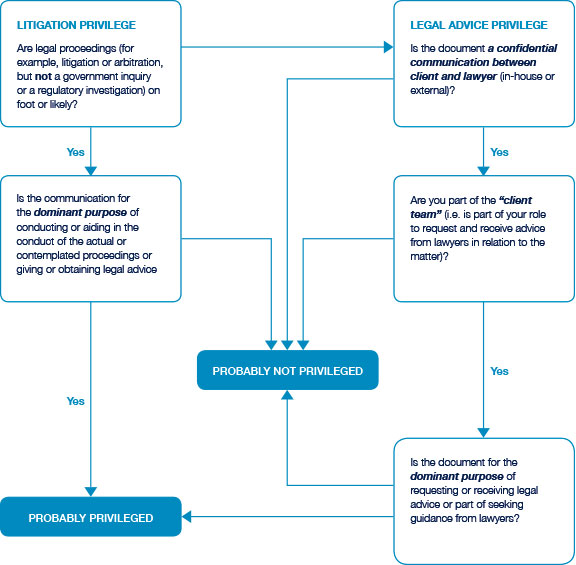