The Law of Privilege: how it relates to P&I and Defence Clubs

Privilege has long been recognised as a fundamental principle of English law. For several hundred years, the law of privilege has protected the right of clients to communicate with their lawyers in confidence, without fear that those communications will later be disclosed to third parties during the course of litigation. However, the modern commercial context has generated numerous challenges to the law of privilege, most notably for industries in which it is common practice for non-lawyers to advise on legal matters.

These challenges are compounded further by the ubiquitous use of electronic communication and data storage; emails in particular are highly vulnerable to widespread dissemination which may undermine a document’s confidentiality. Even in circumstances where privilege has arisen, it is all too often lost at the click of a button, leaving litigants facing the prospect of disclosing sensitive documents to their adversaries and into the public domain.

This note will outline the current status of privilege from an English law perspective, before addressing some common scenarios particular to P&I and Defence Clubs in which they may run the risk of making communications that lack the protection of privilege.

The current status of privilege The Supreme Court delivered its judgment last month on the most recent case to consider the limited scope of the law of privilege (R (Prudential Plc & Anor) v Special Commissioner of Income Tax & Anor [2013] UKSC1). The judgment serves as a cautionary tale for those across all industries who receive legal advice from non-lawyers. The case concerned tax advice given to Prudential plc by its external accountants, disclosure of which had been sought by the Revenue. The court ruled that because the advice was given by non-lawyers Prudential plc was not entitled to claim privilege. This meant that all relevant communications were fully disclosable, even though the advice was indisputably legal in nature and had it been given by a lawyer there would be no doubt as to privilege attaching.

The Prudential case concerned legal advice privilege, a category of privilege that attaches to confidential communications between clients and their lawyers during the “ordinary course of [the client’s] business”. The Supreme Court’s ruling reinforces the strict rule that only communications between lawyers and members of the “client team” will benefit from the protection of privilege. This contrasts with another category of privilege, litigation privilege, which applies in circumstances in which legal proceedings (such as court litigation or arbitration) have either already commenced or are highly likely to do so. In this situation, communications with third parties will also be safe from disclosure, provided their dominant purpose is linked to the conduct of the proceedings.

The Supreme Court’s decision further entrenched the “client team” concept which emerged from the litigation in the early 2000s between creditors of the collapsed BCCI and the Bank of England (Three Rivers District Council and others v The Governor and Company of the Bank of England [2003] EWCA Civ 474). The Court of Appeal’s highly restrictive interpretation of who exactly constitutes the “client” for the purposes of obtaining legal advice engenders a significant risk to clients even in circumstances where the advice has been given by an external lawyer. Under the rule created by this case, only employees of the advisee client whose role it is to request and receive advice from external lawyers will be able to assert legal advice privilege over those communications.

The meaning of “lawyer” and of “legal advice” has also attracted considerable judicial scrutiny, particularly within the context of in-house counsel. On this issue, English law differs from the position in the majority of European jurisdictions as well as under EU law itself (Thus in circumstances where a company is under investigation from, for example, the EU competition authorities, legal advice privilege will not cover advice from in-house counsel; see Akzo Nobel Chemicals Limited v European Commission [Case C-550/07]), which considers in-house lawyers “insufficiently independent” from their employers to warrant the protection of privilege. However, provided that the communications in question are confidential and concern advice which is legal in nature (as opposed to, for example, strategic or purely commercial), English law will still protect them from disclosure to third parties.

Once a client has obtained confidential advice from a lawyer over which it may safely assert privilege, there follows the enduring challenge of retaining it. This issue underlines the distinction between litigation privilege and legal advice privilege, namely that the former will attach to communications with non-lawyer third parties while the latter will not. Thus if litigation is reasonably in contemplation, imminent or existing, and the purpose of the communications is predominantly connected to the proceedings, litigation privilege will protect both confidential advice obtained from non-lawyers and a lawyer’s advice which the client has then forwarded to a third party.

Conversely in the case of legal advice privilege, the protection from disclosure may be lost if the client shares with a non-lawyer third party the confidential legal advice received from a lawyer. In these circumstances, the client is taken to have waived its right to assert privilege where the extent of the document’s circulation is such that it no longer fulfils the definition of a confidential communication between a client and its lawyer. That third party may even include employees of the same company who are not part of the “client team”. Clients must therefore exercise caution when disclosing parts of documents or documents that form part of a sequence (such as one email in a chain), as it will be open to the other parties in the litigation to force disclosure of the remaining document or documents over which the client will be held to have waived its right to privilege. This last principle applies to both litigation privilege and legal advice privilege.

We set out below some common scenarios which are likely to arise in the course of a Club’s business and which shed light on the numerous threats to asserting privilege over confidential documents.

The following flowchart illustrates the way in which the courts will determine whether or not a document may be protected by privilege. 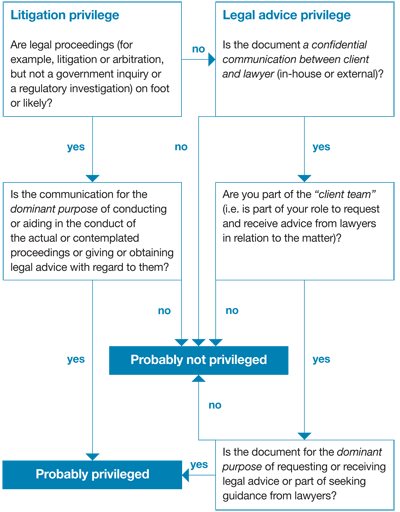 This note has covered some of the obstacles and pitfalls that may undermine an entitlement to privilege. Clubs must therefore exercise abundant caution in order to safeguard their confidential communications against disclosure to third parties during the course of litigation, both by as far as possible ensuring that the advice they receive is privileged in the first place, and preserving that protection permanently.